𝙒𝙞𝙣𝙩𝙚𝙧 𝙒𝙤𝙣𝙙𝙚𝙧𝙡𝙖𝙣𝙙 𝙊𝙥𝙚𝙣 𝙃𝙤𝙪𝙨𝙚! Enjoy some treats and hot beverages. We’ll be making gingerbread house crafts and Kim will be presenting an overview of Alpine Adventures. Alpine Adventures in Germany, Austria, and Switzerland. All from the cozy comfort of Woodstock Inn. Enjoy being immersed in the land of Christmas markets, handcrafted goods, and cozy lodges.Come by and see the inn all decked out for the holiday season. Door prizes!

Our NEXT event: 𝙄𝙣𝙩𝙚𝙣𝙨𝙞𝙫𝙚 𝙇𝙖𝙣𝙜𝙪𝙖𝙜𝙚 𝙞𝙣𝙨𝙩𝙧𝙪𝙘𝙩𝙞𝙤𝙣 𝙞𝙣 𝙎𝙥𝙖𝙣𝙞𝙨𝙝 (November 16th-20th)
Come for the week and learn in small groups from Kim, professional language teacher. Or, come after work from 6-8 to pick up some conversational phrases and practice your Spanish abilities.

𝗪𝗲 𝘄𝗶𝗹𝗹 𝗼𝗿𝗱𝗲𝗿 𝗱𝗶𝗻𝗻𝗲𝗿 𝗮 𝗰𝗼𝘂𝗽𝗹𝗲 𝗼𝗳 𝘁𝗵𝗲 𝗲𝘃𝗲𝗻𝗶𝗻𝗴𝘀, and eat together in an immersive atmosphere where the focus is on practicing Spanish. There will also be some extensive tips and tools on how to teach your children Spanish from home.

Travel with Kim to Italy from the cozy comfort of Woodstock Inn! Kim lived in Italy for 7 years and has in depth knowledge of nooks and crannies you can’t even imagine. This is a favorite country to travel to, and you won’t want to miss it. Take away some fall recipes from Tuscany! ⠀
⠀
Pricing: Regular bed and breakfast room price + $50 for workshop⠀
⠀
𝗖𝗮𝗹𝗹 𝘂𝘀 𝗮𝘁 𝟴𝟭𝟲.𝟴𝟴𝟲.𝟱𝟲𝟱𝟲 𝘁𝗼 𝗯𝗼𝗼𝗸 𝗮 𝗿𝗼𝗼𝗺 𝗮𝗻𝗱 𝘄𝗼𝗿𝗸𝘀𝗵𝗼𝗽!⠀

Come see our rooms all ready for the fall season!

Sample some of our favorite treats, some of which are internationally inspired!

Craft time for kids and the young at heart.

Tell your friends about this event and if they stay you get 10% off your next stay!

Our in-house author and travel expert will be discussing travel group plans to England (when we get the okay to travel)!Call the Inn at 816.886.5656 for additional information.⠀

Memorial Day is just around the corner and places are opening up, i.e., The Kansas City Zoo, and more. So we decided to offer our guests SPECIAL pricing for the next 99 days:

Online booking available and use the code 𝟵𝟵 to get this deal. Or call the innkeeper to receive this pricing: 816.886.5656

The safety and well-being of our guests is always our top priority, but that commitment takes on special significance in light of the global outbreak of COVID-19 (coronavirus). As always the highest level of cleanliness is extremely important to us.  Our desire is for our guests to always feel safe when they are visiting.

We have used the time to thoroughly disinfect all guest areas. We recommend following the CDC guidelines for continued social distancing at this time. The set up of the bed and breakfast and property allow our guests to social distance. We have also implemented a choice of two breakfast times and on-demand request for in-room breakfast.

A great way to support us or any small business during this transition time is to purchase a gift certificate for future use. Give one to an essential worker as a special “Thank You” for all their hard work and dedication.

Travel with me! Take a virtual tour with me of some of the hidden and not so hidden gems in Europe and beyond. I lived in Europe for 17 years and organized 30-40 trips for family and friends. In these little bite-sized tours, I’ll take you to a place that you may someday want to add to your bucket list! Here we go!

There is a little town called Penn in the area of Buckinghamshire just northwest of London where I used to live. It’s off the M40 not far past the M25 which is the ring road around London. There is an exit called Beaconsfield, and Penn is about 5 miles in. It consists of only a church, a couple of pubs, and a collection of houses…though there are also many impressive estates around. Anyway, it has an outsized history compared to its tiny size.

First of all, Penn was part of the Penn family lands, as in the Penn family from which the state of Pennsylvania is named. During the British civil war, Oliver Cromwell holed up with his armies at the Crown in Penn. The Crown was the first pub I ate at during the warm summer days in August when I first arrived for my job in England.

We sat outside and my sponsor told me the story I am now telling you, and pointed to the different additions to this 500 year old pub which had served as Cromwell’s Inn in the 1640’s. She pointed to an added building that served as a coffin making facility during the plague of 1665. The Crown is located right across the street from the little church where the Penn family attended, and a tunnel from the coffin makers to the cemetery was created so that the virus would not become airborne.

Next to the little church is a very small one lane road, the kind that England and Ireland are famous for, and the kind that has pull outs to allow oncoming traffic to pass. After lunch we crossed the street and walked along this path. It’s a very old path evident by the fact that the road runs 3-4 feet below the level of the terrain in some spots. One mile down the path and you arrive at the Royal Standard. The Royal Standard is almost 1000 years old. The King holed up here with his troops when fighting Olivier Cromwell. It’s like walking back in time when you enter the Royal Standard. The leaded glass windows, stone walls, and petrified wood speak of its age. It is used in movies, particularly since Pinewood studios is nearby.

On a summer’s eve, it is full of people who are a mix of locals and first-timers who feel pleased with themselves at having found a hidden spot of such historical significance. The food is good too! I love their mushroom risotto, and Eton Mess for dessert (strawberries, meringue cookies, and cream.) Sometimes people order their special brews like strawberry beer. In the back of the menu there are tales of the inn including that of kings and highwaymen, ladies and scoundrels.

I love taking some of my traveling groups to this little spot in England. Its a hidden spot that is just bursting with stories and history underfoot.

What do you think? Is that someplace you would like to go? Let me know what is on your bucket list.

There is nothing quite so cozy as a cup of English tea in a charming setting with some nibbles on the side.

On a day trip from London, you exit the M40 onto the A40 and one of the first sheep towns you come to after Oxford is Burford. I say sheep towns because once upon a time the area of the Cotswolds (meaning sheep on the hills) was famous and prosperous for the sheep trade. Burford is a little town with very old houses leaning together along a main street that slopes gently down to a a valley and bubbling creeks.

In the middle of the main street (called high street in England), is a bakery called Huffkins. Once you peel your eyes from the picturesque windows filled with hot cross buns and rasberry tarts, ask the hostess for a seat. To sit down you pass through a very popular bakery filled with beautifully displayed goods and into the little dining room. The stone walls speak of the age, and the cheerful dining room is filled with wood tables and chairs. We were there in the spring and the sun peeked through the windows, and little wildflowers in tiny vases perched on the windowsills.

We ordered afternoon tea which came with famous English tea in a little white teapot with cream and lumps of raw sugar. On the three-tiered carousel were little egg salad and cucumber sandwiches, multilayered slices of cream cakes, and a variety of shortbread cookies (famous lardy cakes optional). We spent a lovely couple of hours that afternoon cozied into the old bakery, eating the delectable selections, and warming our bodies and hearts with good English tea and company. Cheers to a wonderful little town in England!

What do you think? Is that someplace you would like to go? Let me know what is on your bucket list?

We are a historic ‘wild west’ town so of course we have some stories to tell and fun activities for October in Independence. If you’re looking for some paranormal activity or just looking for something different to do, enjoy the spirited fun at several of the historic sites. (The events below are NOT in any kind of order) 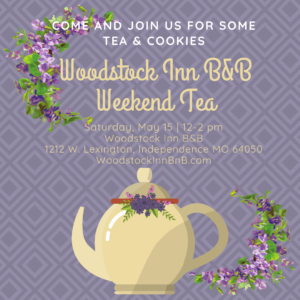